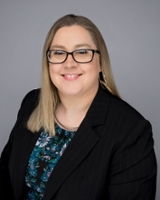 Originally from Pittsburgh, Pennsylvania Krystal has lived in Broward County since 1995, but
don't let that fool you; She is true black and gold when it comes to the Pittsburgh
Steelers. Outside of her career, her first love is her family. She is the proud mother of her son
and two stepsons, and loving girlfriend to her boyfriend of 10+ years. In her off-time, her
hobbies include sewing, relaxing, spending time with her family, crafting on her Silhouette,
puzzles, and anything Disney.
Return to top of page