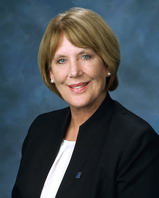 Dr. Brighton joined the Physician Assistant Department at Nova Southeastern University - Jacksonville in July, 2008, as the Administrative Assistant for the program and became the Clinical Support Coordinator in January, 2009. In 2013, Stephanie was promoted to the position of Clinical Director, and in 2017 was awarded an appointment as Assistant Professor. She is responsible for overseeing the clinical responsibilities of the program which include managing the Clinical Team and overseeing placement of the 2nd year students in their clinical rotations.

Stephanie is very proud to have an active involvement with charitable organizations. She served on the Board of Directors for The American Heart Association, Mt. Laurel, New Jersey, as well as Hospice of Camden County, New Jersey. She has been very active in Rotary Associations in Cherry Hill, NJ and St. Augustine, FL. Stephanie has also volunteered with Meals on Wheels in St. Augustine and Hospice of North Florida.

Stephanie is originally from Bethlehem, Pennsylvania and has lived in Jacksonville, Florida since 1989.