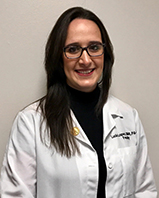 Dr. Lopez joined the Physician Assistant Program in February 2017 as an assistant professor. She is a South FL native, but received her medical training at Wake Forest University in Winston Salem, NC. After graduating in 2013, she spent 3 years in clinical practice at a federally qualified health center (FQHC), affiliated with Wake Forest, practicing Women’s Health. During her time there, she served for the National Health Service Corps. She is currently practicing at an FQHC site locally, in Liberty City.

Prior to PA school, Lucia graduated from Florida International University with a Bachelor of Science in Biology and a Bachelor of Arts in Psychology. In 2020 Dr. Lopez was awarded her EdD in Health Professions from A.T. Still University.

She is bilingual in Spanish and her interests lie in underserved/immigrant populations and long acting reversible contraceptive methods. During her time at Wake Forest, she was class president for the Katherine Anderson Society 2011-2012. She served as preceptor for PA and medical students and was granted the Best Teacher Award in May 2016.