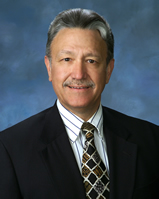 Professor Arnold is involved in teaching the basic science courses for the OTD department. These courses, Anatomy and Neuroanatomy, occupy a significant portion of the first year’s coursework.

Dr. Arnold is a graduate of the University of South Florida, College of Medicine with a background in basic medical research. His research interests include human tissue culture, modeling of human endocrine diseases and neural membrane disorders and he has published or presented several articles in journals and meetings. Previously, he has been a principal investigator on two multi-year grants (NSF and NIH). He has held teaching positions previously as an assistant and associate professor (Anatomy, Physiology and Biochemistry) and was promoted to full professor. He has also held the positions of program director and department chairman of Basic Sciences at other universities from 2005-2013 as well as having been twice granted tenure.